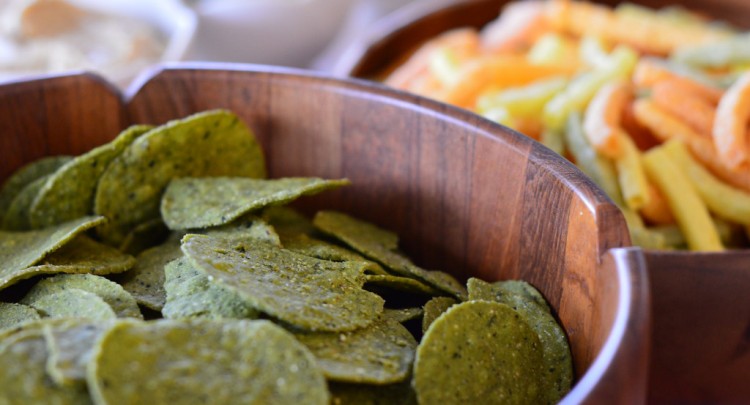 5 FOODS THAT SOUND HEALTHY (BUT AREN’T) Don’t fall for every frozen hockey puck marketed as a ‘veggie burger’ at your supermarket. The reality is that most frozen veggie burgers are loaded with highly processed ingredients (including processed soy and/or processed cheese) rather than a sufficient portion of actual vegetables. These burgers are often stripped of the nutrients that constitute them as ‘healthy’, and are overloaded with calories and sodium … without the natural nutrients to balance out the bad stuff.

Alternative: Good news – there are good veggie burgers out there. It might just take a little extra effort. Look for patties whose ingredients you can recognize and those that derive protein from foods like beans and seeds rather than processed soy. We likeHilarys’ Eat Well Adzuki Bean Burger for all those reasons.Of course, you can also just eat real veggies! Nothing tastes better than fresh produce. While veggie chips might sound healthier than your regular ketchup-flavored-potato chip, they’re usually just corn flour and potato starch disguised in an attractive shade of green. Even the veggie chips that do contain an acceptable amount of vegetables have gone through so much processing that – like veggie burgers – their essential nutrients like vitamins A and C are lost. You also might be getting a bigger dose of sodium and unhealthy fats than you’d probably like.

Alternative: You can make your own baked veggie chips or look for brands that actually do contain a sufficient amount of vegetables by checking out their ingredients. The vegetable should be the first or second ingredient listed, and if it’s a kale chip it should be kale, rather than kale flakes or kale dusting. Go unsalted, and beware of ingredients with long names that you don’t recognize. Again, actual vegetables are always a good choice, too. Frozen dinners are no doubt convenient. Throw the words healthy, low-fat, or low-calorie in there, and they seem like a great choice. But frozen diet entrees can also be chock full of preservatives, additives, and sodium, and surprisingly, not enough calories to keep you full. That puts you at risk for undereating. (Undereating can make it tougher for you to lose weight by slowing down your metabolism.) Most frozen entrees also contain unrecognizable ingredients that help mimic the flavors and textures of fresh food… but provide very little actual freshness.

Alternative: If you are too slammed to find time to cook, there are freshly prepared meal services (kind of like, ahem, Freshly) that deliver healthy meals – with all essential nutrients in tact – to your doorstep. Yogurt, most especially Greek yogurt, is a pretty optimal snack. But there’s a big difference between fresh Greek yogurt and the sugary concoctions you see in some coffee shops with all of their extra add-ons. These parfaits, while they do in fact contain essential nutrients calcium and protein, also come with too much sugar (often as much as 30 to 50 grams) to make them seem tastier.

Alternative: Go for simple cups of yogurt mixed with fruit. You’ll still get the sweetness from the fruit, but none of the extra sugar. You might have to do a little adjusting your expectations of what yogurt actually tastes like, but remember, this is natural, and won’t add anything extra to your waistline. Just because it’s gluten-free, doesn’t mean it’s good for ya. While a lot of the pre-packaged gluten-free ‘alternatives’ you see at supermarkets are, in fact, devoid of gluten, they’re often also substituted with unhealthy ingredients like refined sugar. There’s little point in eliminating refined breads, pasta, and flour-based cookies if you’re just going to load up on prepackaged cookies, pasta, pizza, or frozen alternatives that are labeled “gluten-free” but still contain evil amounts of sugar and other high-glycemic elements. Keep your refined sugar levels very low (ideally at zero), and check ingredient labels for artificial sweeteners, even if those sweeteners are gluten-free.

Alternative: Go for fresh, whole, naturally gluten-free foods rather than the pre-packaged, highly processed “substitutes.” We always advocate for a diet of meat and fresh produce. Check out our guide on going gluten-free here.